The game of Go is one of the world’s great games. The depth of strategy and tactics it has is nearly unmatched by anything else: even modern tabletop and electronic games. In the late 90s, I was involved in building an AI planning system to play parts of the game. This was both very hard to do (huge congratulations to the Google AlphaGo team that recently beat one the world’s best human players – it’s hard to overstate what a phenomenal achievement that is!) and it created a long-held fascination with the game for me.

Over the years, I didn’t get much better at Go, but this love of the game did lead to a bunch of ideas on how it might be possible to create a new game which uses the rules of Go but does a few things which Go does not:

Over time, some prototypes were built. Pictured below is one of the first versions of the game which eight people played. It was madness and we didn’t finish every game, but it felt like something which more people would enjoy. 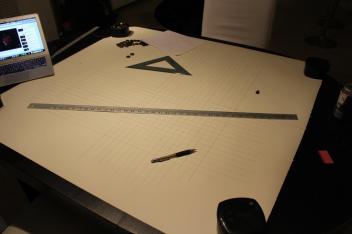 So, with some encouragement and support (thank you, Kerrie, Andrzej, Vanessa and others!), we’ve been working on trying to make the game something real!!

That first epic version took many hours to play, so late last year, we made some prototypes that were a bit less cumbersome. Now we finally have actual printed prototypes and tons more ideas.

Image: The 2017 edition with a printed board and real go stones and with flat tokens. Also, we introduced dice and cards in this edition (but the sand timers turned out to be a bust…!).

So it’s feedback time and learning time with this blog. We’re planning to post as much as we can about the game here and see what people think. We’re also aiming to make a playtest-ready version (working hard on that as we speak) and we’ve been working with some folks for artwork.

There is a way to go, but if things go well hopefully we’ll be able to get everything together to run a Kickstarter in the summer (large or small depending on interest) and make some real copies.

We’ll do a “why Go” post at some point. but for now, the first question someone might ask is “Hasn’t multi-player Go been done already?”. The answer: yes it has. There have been quite a few attempts but it seems most have met with pretty limited success. A few examples:

While there are some great ideas here, it’s fair to say none of these variants to date have broken out and gotten a lot of players. This could be because they were never marketed, but also because they still contain some of the more rigid constraints of Go and those work against the free flowing play.

In searching for a variant which works well for free flowing play, it’s fair to say that rather than coming up with something that is a “multiplayer version of Go”, the result is more like a “Multiplayer game based on the Go Game mechanic, but inspired by other games”. The new game does a number of things which end up being quite effective:

In combination, this list seems to solve a few of the challenges that arise when using multiple coloured Go stones. It might also create others that we find with more play testing. We’ll be publishing the current version of the rules shortly!

While the multiplayer dynamic worked pretty well, we had only really addressed one of the challenges we had in mind. In particular, even if the game is multiplayer, it is often difficult for beginners to get into their first game. Go handicaps help, but it is still a game of mastery and tactical Go skills are important.

To make it more of “fun + brains” experience, rather than purely brains, we added some randomness with dice determining move options and a set of cards with special moves. The special moves, if played cleverly, can have a major impact on the game. This gives casual players a way to be more effective and enjoy themselves more. Coupled with handicaps, experienced players have a challenging time dominating a game!

The plan is to have an alternative rule set (such as Pro or Tournament styles) without this card aspect.

So that’s it – we’d love feedback on the idea and what we’re doing! A posting with the rules and current prototypes is coming up as soon as we can manage!

We have a couple of physical playtest kits on hand in San Francisco and we’re currently working on self-print versions. Stay posted for those!