With Mitropia now available on Tabletopia (click here to run your own game!) we’ve had a blast playing against friends from around the globe! High priority has been trying out different combinations: a special shout out to all those that have generously spent time with us!.

One of the combinations we didn’t know would work well was a two player. But thanks to an enterprising player (thank you @lindbrandon!) we found out! We’ll be testing more of these, but the first game went surprisingly smoothly….

With two players, we used a 9×9 board with the corners cut out which is the standard Mitropia setup at the moment. Other elements of the setup:

Here’s how the game unfolded… 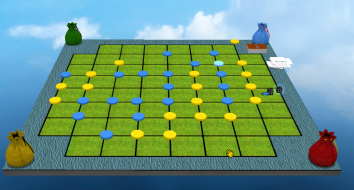 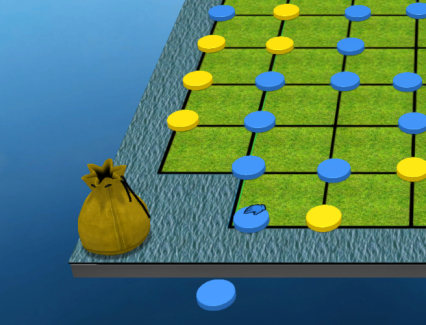 There were some close moments in the game where Yellow or Blue could have gotten significant upper hand!

On this size board, for two player play, a few things were not optimal:

All in all however, the two player version played very much as a three or four player game. They gameplay was also significantly differently from standard go, with cards used multiple times to thwart plans and change the course of the game.

More play-tests coming up – thank you to our brave play testers!!!